You Must Be Present To Win 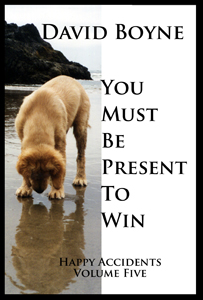 Naked Woman on the Side of the Road
by David Boyne

“A poem is a naked person…
Some people say that I am a poet.”

I was driving on College Boulevard late in the afternoon of a warm summer day, careful to stay under the speed limit of 50 miles per hour as I accelerated up the long hill near Mesa Avenue.

And off to the right standing on the sidewalk I saw a naked woman.

Passing her at 73-feet per second, my eyes blinked once, like the shutter of a camera taking a photograph.

She looked to be in her middle forties, with blonde hair that was professionally colored and cut to stop abruptly a few inches above her round shoulders. Her breasts were large, heavy, wide apart, and almost reached down to where her round stomach fell in a big fold above her wide hips and thighs. She was staring at the flow of passing cars. Her head was inclined just slightly to the side, and her expression was a content, dreamy, distracted smile.

There was someone else in the tableau vivant. A uniformed police officer was approaching the woman and holding out a silver foil emergency blanket—even while keeping his eyes averted and leaning backward—clearly hoping that the woman would awake from her reverie, take the offered blanket, and save him from having to wrap it around her.

Then I was past.

Had the woman been harmed in some terrible way? No, I reassured myself. Not with that beatific smile.

Maybe she was drunk or drugged. But she had stood so casually still, neither swaying nor wobbling, while staring at the passing rush hour traffic with a composure that was in stark contrast to the nervous cop wrestling with the silver blanket and his sense of propriety.

As I drove over the hill and continued on my way, I looked at the mental picture I had taken and what intrigued me most about the mystery of the naked woman on the side of the road—was her smile. That smile was satisfied yet selfless, faint yet unmistakable. It was an expression of concentrated interest, without a trace of hesitation, anxiety, or judgment. I had glimpsed such a smile on others, in random, unrelated moments, including carpenters hammering nails while framing a house, and the Dalai Lama in a television interview listening intently to a question he had probably been asked 7,000 times before.

Maybe the woman lived nearby, in one of the big houses in the gated community atop the wooded hills overlooking the road. Maybe she had been putting on her makeup early that morning and she stopped, seeing in her mind and feeling in her gut the emptiness of driving 30 miles to spend 10 hours in an office sitting at a desk with her eyes and mind continuously jumping from one to another of three computer screens while the click click click of the mouse under her hand counted out the passing moments of her life. Maybe she had grabbed her phone from her purse and had called her office, and in a shaken voice claimed to have a “stomach flu or something.”

Maybe when she had snapped closed the phone she felt an immense wave of soundless relief, and both her mind and her body had gone slack.

Maybe for a long time she sat in her bathrobe on the leather sofa staring at the big flat-screen television on the wall across from her, without having turned it on. Instead, she watched the images filling the screen of her mind. At first, the dense quiet filling the 4,000 square foot house had agitated her, like a single mosquito near her ears. She told herself to get up and get dressed, but she stayed on the sofa in her robe staring through the French doors, across the patio she never used, to watch the birds flitting among the leafy trees. Even when the three gardeners appeared, she sat and watched through the French doors as they worked the yard with leaf blowers and edgers and mowers. Then the gardeners were done and she stared at the sections of sky she could see through the door and windows, watching how the white clouds flowed and combined and pulled apart, like the blobs floating inside a lava lamp.

Time slipped past until she came to herself, realizing she was standing in front of the full-length mirror in the hallway near the front door. Each morning before leaving for work she would stop and look into this mirror, making a fast survey of herself. But this day she shrugged off the bathrobe and stood in front of the mirror for a long time, looking at her naked body as her thoughts flowed past. The man she was dating liked to have sex every time he was with her but he never made much of an effort to bring her to orgasm. He had gone to Cabo last month rather than go with her to the wedding of her niece and meet her family. She thought of her boss at work, a woman much younger than her who seemed to always be working through a secret, well-planned strategy with an unknown goal.

And when she had glanced through the narrow windows beside the big wood front door and saw the three plastic wrapped newspapers in the driveway, she had wondered who had dropped them there. She got her news online and did not subscribe to a newspaper. When she unlocked and pulled open the heavy wood front door it had made a soft whoosh, like air entering a vacuum-sealed jar.

Standing in the driveway, she liked how the sun-warmed asphalt wet from the automated lawn sprinklers felt on the bottoms of her feet. She almost gasped with the swift memory of herself as a young barefoot girl on some long unremembered summer day. Entranced by the white-gold light of the late afternoon sun she had started walking, going very slowly down the long hill and stopping often to look into the bay windows of the empty houses of her anonymous neighbors. The heavy wet scent of the blooming hedges swelling out to block half the sidewalk she walked along was intoxicating. She was delighted with how she could somehow still detect, swirled up into the warm perfume of the hedges so close to her, the very slight tang of the ocean seven miles away.

What a beautiful and strange place she was in.