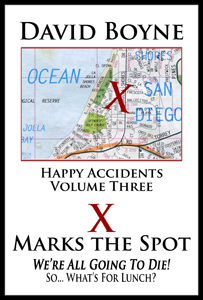 We’re All Going to Die! So…What’s for Lunch?

Just Passing Through
by David Boyne

“My! People come and go so quickly here!”
—Dorothy

Odds are, when you awoke yesterday you took it for granted that you would be alive for the Unforeseeable Future.

2,600 other Americans also woke up yesterday and took it for granted that they would be alive for the Unforeseeable Future.

But they are not.

Some Americans insist on dying in public, often dramatically. They crash cars, shoot themselves and/or others, jump from high places onto hard surfaces, and have aneurysms at board meetings and in shopping malls.

But the Silent Majority of modern Americans do their dying courteously and efficiently, inside of hospitals, nursing homes, and hospice centers, out of everyone’s sight and everyone’s way.

I could be wrong, but this cultural preference for dying off-stage has led Americans to believe there is a protocol for Death. We expect Death to give notice of its approach and allow us time to wrangle with our insurance companies, to tell our children how dear to us is their every breath, to make peace with—or refuse to make peace with—the Asshole who is the other parent of our children, and to get on the internet and buy a Combo Living Will and Last Will and Testament Package for only $99.95.

Much of what I think I understand about Western Civilization I absorbed not from reading texts supposedly written by Socrates, Homer, or God, but by watching the “Western” movies that were always on television when I was growing up in black-and-white America. Those Westerns indoctrinated me with my nation’s myths and legends. (A myth or legend is a lie repeated for three or more generations.) One legend that struck my still-forming brain like a philosophical tomahawk was encoded in a scene in which a Noble Savage, usually portrayed by an actor of Italian lineage, is mounted on horseback, his stern and stoic face covered with geometric patterns of war paint. The long, straight, jet-black hair of his wig is held in place by another prop from Wardrobe, an eight-pound sculpture of leather, feathers, and turquoise studs. In his hands the Noble Savage holds the Stone Age weaponry he is about to use in battle against the tsunami of Manifest Destiny backed by repeating rifles.

Riveted by this scene, I watched without blinking as the Noble Savage slowly looks at the ground, then slowly raises his gaze up to the sky, then slowly levels his eyes, casting a thousand-yard-stare straight at the horizon—and into a well-placed camera—and seemingly into my own eyes—as if he is seeing into the Unforeseeable Future. His nostrils flare, and my seven-year-old consciousness somehow knows, whether from hammy acting, or the collective unconscious, that he is breathing in the warm scent and feeling the pulse and seeing the beauty of this Earth teeming with Life, including his own.

And he speaks his line, “Today is a good day to die.”

Regarding good days to die.

On a hot summer day when I was 19 and in the happy company of a half-dozen friends, casually trespassing on the property of a water company so that we could swim in a vast reservoir hidden by thousands of acres of rolling hills heavy with pine trees, I almost drowned.

I had swum out to the middle of the lake, separating myself from my friends near the shore. There, swimming lazily on my back, staring into the sky, I could hear the soft sounds of my friends’ voices skimming across the calm surface of the green-blue water.

Soon I had drifted close to the dam situated at one end of the long reservoir. The dam had been built to create the reservoir and it now controlled the level of the lake by allowing water to pass through gates built into its base, fifty feet below the surface. The wall of the dam was a quiet, passive presence, and it seemed to me and to my friends that the damn was as natural a fixture as the water and the hills and the pine forests. Our visits to the reservoir usually included clambering around one of the two padlocked chain-link doors at each end of the dam and carefully walking a hundred yards or so to reach the middle of its three-foot wide flat top. We would stand there, facing the lake and hills, with the surface of the placid water only inches below our bare feet. At our back was the other side of the damn—a fifty-foot drop to the rock-strewn stream fed by the water passing through the gates built into the base of the dam. Standing quietly in the center of the dam and staring across the vast green surface of the reservoir that mirrored the blue sky and white clouds above, it would feel as if we were suspended in air. (Especially when we had been smoking marijuana.)

For reasons lost in the fog of Memory, perhaps simply that I was 19-years-old and still engaged in the essential work of surveying the boundary between Life and Death—I decided I must know if I could hold my breath long enough to touch the bottom of the reservoir.

I emptied the breath from my lungs, inhaled deep and fast, rolled over and began swimming downward.

I swam fast but efficiently, careful to conserve the breath I held. The water went from warm to cool and then, like crossing an invisible border, the water became cold, cold enough to make me shiver.

I swam with my eyes open, although there was little to see other than the gold and yellow and orange flecks of silt suspended in the green-black water, the same way sun motes are suspended in air. Swimming downward became harder and my descent slowed, and I thought I should turn for the surface—when all at once I seemed to accelerate. For the briefest moment I thought the acceleration was from my own momentum, the same way running a mile was hard work, but the second and third miles would pass with almost no effort.

And then I understood. The sudden acceleration was not from my own momentum. It was from the lower layers of water being forced through the small gates at the base of the dam. I was being pulled down.

I tried to turn my body upward and swim toward the surface—but turning myself was difficult, and my smooth swimming became a clumsy, flailing somersault. The breath I held in my lungs seemed to be exploding inside my chest. The thirty feet of water above me felt like tons of wet cement.

My Unforeseeable Future seemed to be resolving. Like watching a movie, I saw myself pulled down and stuffed into one of the open gates at the base of the dam. There, deep under the weight of water, whatever it was inside my body that made me Alive would be surgically removed, while above, my friends continued on with their lives, unaware.

This all passed in two or three heartbeats.

And then I broke free from the downward pull of the water and swam upward in blind chaos until I splashed through the surface and gasped in air.

I was back in the same hot summer day. Nothing in the world had changed. But me.

I swam to the edge of the water, walked onto the shore, and sat on a towel, watching my friends.

I spoke very little the rest of the day. I did not tell anyone what had happened. I felt myself in a trance, but it was a trance in which my sight and sense of smell, taste, touch and hearing, all were preternaturally sharpened.

Looking back, I think that hot summer day when I was 19 was a good day to die.

At the very least, it was a rare opportunity to exit the stage with drama, with poignancy, and with the assurance that a handful of small-town eulogies would extol the Great Life I would have lived. If only I had lived.

But I did live.

So what if my Unforeseeable Future has resolved into a Life that is by everyone’s estimation including my own, nothing to write home about?

It still trumps having been dead all these years.