Inside My Three Pound Universe 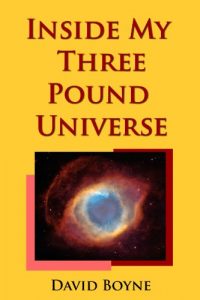 Running Away
By David Boyne

Your work is to discover your world and then with all your heart give yourself to it.
—Buddha

All my Life, I have been a student of the gentle art and practice of Running Away. I hold a black belt, 7th degree.

When I hear people attach that yuckiest of emotions, shame, to the gentle art and practice of Running Away, I fail to understand. In my view, Running Away is nothing more and nothing less than a course correction. And, given that every person in motion around the earth right now is, like every plane, or rocket, or boat, off course 95% of the time, it’s clear that if we want to get where we are going, we must be willing and able to make course corrections. To not make course corrections is at best incompetent, and at worst, incompetent.

I could be wrong, but if we were to examine every act of Running Away in the entire history of that gentle art and practice, we would find there is but one desire driving every Running Awayer: They have, to varying degree, lost control of their once-in-a-lifetime Life. And they want it back.

Yet, somehow, in the swinging of pendulums, the reversing of magnetic poles, and the attention deficits of public opinion, an expert and expeditious exiting that would once have been admired, even envied, is now derided as irresponsible, immoral, even craven. I fail to understand. What could be braver, or more responsible, than to take on the challenge and chore of being in charge of one’s Life?

Once upon a time, Running Away, and Running Awayers, were honored figments of the American imagination. Our history includes a bunch of smart rich white guys Running Away from being subjects of the British monarchy, to become the Founding Fathers; and Pilgrims Running Away from terrible persecutors in the Old World, to become terrible persecutors in the New World. Our myths include Huck and Jim rafting down the mighty Mississippi; Eliza crossing the ice pack on the same metaphorical river; Shane riding into town, and riding out; and Norma Jeane Mortenson catching a bus to Hollywood.

The gentle art and practice of Running Away is how we create Change—in our selves, and in our world—without the use of force.

Here is a fast, and loose, and by no means complete, list of the many splendored forms of Running Away in America:

Playing Hooky is Running Away from school. Perhaps because we do it when young, and new to the gentle art and practice of Running Away, Playing Hooky gives us an ineffable—something—we can never fully recapture later in Life. No matter how hard and often we try.

Quitting is how we Run Away from a job. There is no shame in quitting, provided it is done with élan. Storming out the door and leaving behind an angrily scrawled resignation letter in which you blame everyone else for everything that has gone wrong, is Quitting. Giving two weeks notice, having drinks with your boss and colleagues on your last day, then setting up shop with all your old firm’s best clients, is Quitting with élan.

Getting Fired is when your employer Runs Away from you.

Immigration is Running Away from where you were born. No one should ever be punished for choosing to immigrate, as it is hard-wired into our DNA. It’s why we got out of Africa, and why someday we will be selling low-interest, no-income-verification mortgages for houses on Mars.

Slipping Away is a subcategory of Running Away, in which we only briefly absent ourselves. And drive to the local NoTell Motel.

Divorce is Running Away from the stranger you woke up married to.

The list goes on, but I believe the point is clear: Running Away is the ultimate Do Over. (This explains why California, the Do Over State, is our most populous.) And while Running Away always rewards us with adventures, on a deeper level, it can give us a heightened sense of Being Alive And In Charge of Our Once-in-a-lifetime Life.

I remember how, at the malleable age of 7, I discovered the gentle art and practice of Running Away.

At sunset of a hot summer day, I stomped across the kitchen and out the back door, yelling over my shoulder to my mother, “I’m leaving! And I’m never coming back!” (I was 7, and had no idea my dramatic exit line was one of humanity’s oldest clichés.)

My mother gasped, leaning over the kitchen counter, crying and sniffling, using the back of her wrist to wipe tears streaming from her eyes. She was chopping onions for dinner.

Once outside, our familiar backyard seemed new, vast, and, strange to me. The departing sun had, like a spiteful arsonist leaving town, torched the blue sky into Technicolor® fire. I experienced a sensation at once thrilling, and, threatening. I felt an Invisible Hand pressing on my chest and making my heart beat strong and hard and fast. It would take a few more years, and a few more Runnings Away, before I could put a name to that Invisible Hand: Freedom. Simultaneous with the strong and hard and fast beating of my heart, there was a strong and hard and fast beating of my mind, as I ran smack up against the nagging question every free person faces in every moment: What the hell do I do now?

My best answer was, “Keep moving!”

I stomped through our backyard, cut across the neighbor’s freshly mown lawn, and came out on Long Hill Road. I kept walking, and as I walked, I squeezed in my small fists the red-hot coals of my anger. I faltered only when I heard small rustlings of unseen animals in the brush beside the road, or when the taunting, teasing songs from unseen birds inside the plush green trees seemed to be calling my name. Distracted by the world around me, my anger cooled, and soon my clenched fists were filled with coal dust. I wiped my hands on my jeans, and kept walking, proving the law of inertia.

A sound-filled, sight-filled, eternity later, I had crossed the half-mile suburban savannah between my parents home and where Long Hill Road ran across a short bridge high above the four lanes of Interstate 95. As I approached the bridge, the familiar noise of large trucks, family-burdened station wagons, and hippie-filled Volkswagen vans, buzzed the air like a swarm of mechanical bees in a cheap science-fiction movie. On the high hill to the side of the bridge, I saw a boy I knew. Dougie French, two years older than me, had the same ultra-short haircut I sported, although my hair was brown, and Dougie’s, even at the age of 9, was pure white. I felt then, but only fully understand now, that Dougie French was an “old soul.” The amused disdain he had for everyone and everything, and that both attracted and repelled me at age 7, I have since observed in many others, who carry the ennui of the experienced traveler having to find something new while, yet, again, passing through an overly familiar land.

From Long Hill Road, I watched as Dougie French picked up a sharp-edged gray rock from the thousands that covered the hillside beside the bridge, having been spread there to keep the hillside from washing down onto the highway. I watched as Dougie French tossed that sharp-edged gray rock up in a low, lazy arc, just to the right of himself, and swung a yellow wiffle ball bat. The plastic bat connected with the rock, making a thwunk sound, and sent the rock arcing through the air. I lost sight of it somewhere above the cars speeding along the highway.

While gravity took charge of the sailing rock, I walked over to Dougie and asked, “Why are you doing that?”

Not experienced with being on the receiving end of the Multiple-Why debate technique, I was stymied.

Dougie held the yellow wiffle ball bat out to me. “Here. You try it.”

I was 7, almost everything that happened every day was new. I tried it.

The first five stones I lifted, tossed up, and swung at, fell harmlessly at my feet. Then I connected, and the sixth stone shot high into the air—straight up. Dougie and I covered our heads and bumped into each other as we hopped and dodged the stone that was falling back down on us like a flaming space capsule re-entering earth’s atmosphere at 17,000 miles per hour. The rock smacked down in the gravel, inches from my black Keds® sneaker, instantly anonymous among the field of gravel from whence it came.

“Scheisskopf!” Dougie yelled, grabbing the wiffle ball bat from me.

While Dougie French and I were laughing and yelling at each other, “Shit for brains!” my mother drove up in the family station wagon and pulled to the side of Long Hill Road. She got out of the car, walked to the front of it, stopped, and yelled, “Get in the car!”

So that there could be no mistake, she pointed at our family station wagon, in the same rigid, imperial way I would point at the ground when I wanted Patches, our family dog, to stay, or to lie down.

“See you around, kid,” Dougie French smirked, leaning on the yellow wiffle ball bat as if he were a tap dancer dressed in a tuxedo and the bat was his walking stick.

I got in the car. All the windows were rolled down and my mother said nothing to me, yet the force of her silent anger made the air inside the car too thick to breathe, a magic trick I had been a captive audience to many times before. As she made a sharp u-turn back toward home, I risked a glance back, and I caught a snapshot of Dougie French, as graceful a juvenile delinquent as Mickey Mantle was an athlete, lazily tossing a sharp-edged chunk of gravel in a low-arc to his side, and making what seemed a slow-motion swing of the yellow wiffle ball bat.

The mental snapshot of Dougie exploded in stars when the hard-knuckled back of my mother’s hand smacked into my turned aside head.

But it came too late. I had discovered the possibilities of Running Away.

The trick, it seemed, was to master the gentle art and practice of Staying Away.