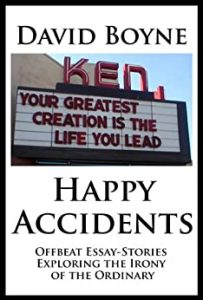 Who invented the bumper sticker?

Bumper stickers are smugly moralistic and self-absorbed. I could be wrong, but I suspect an American must be responsible. Possibly an Australian. But I cannot imagine anyone in Peru or Japan or Finland being the first to think, “Hey! I can print a terse message on opaque weather-resistant material with an adhesive backing then slap it on the bumper of my car and Shout My Truth® and Values™ to the World!”

I’ve had two bumper stickers in my life. The first one I made in my high school graphics class and slapped on my wreck of a 1965 Mustang. It read, Save the Wolf, and it had an image of a howling wolf that I had pirated from a Paul Winter Consort album.

When I was 17 and felt compelled to tell the world (or at least whoever was behind me breathing the noxious exhaust from my car) to Save the Wolf—what was I really saying? How could the words on that bumper sticker have “saved” even a single wolf?

That bumper sticker did not have anything to do with wolves. It was—as I have come to believe that absolutely everything in Life is—about me.

I was telling the world something about me, myself, I. But what?

Did the bumper sticker I had made tell the world that in my junior year in high school I had read the biologist Farley Mowat’s book, Never Cry Wolf, five times, as well as every other semi-scientific or popular work on wolves that I could find? Did it tell anyone how I had repeated Mowat’s experiment and gone on an all-meat diet for two months, just to see what it was like to eat as a wolf would eat? (Note to Dr. Atkins’s estate: I lost weight!) Did the bumper sticker somehow reveal that when in school and diligently studying the view out the classroom windows, I was daydreaming of walking out of school, hitch-hiking to Alaska, amassing mounds of camping gear and grub—including some strange, life-sustaining thing Jack London’s books called pemmican—and disappearing into the Arctic wilderness to spend my life in the company of wolves?

A few years ago, I purchased the second-ever bumper sticker of my life. I freely admit that I felt a smugly moralistic and self-absorbed pleasure as I slapped that message on my wreck of a 1986 Volvo: Dog Is My Co-Pilot.

But why, out of all the terse messages in the world that have been printed on opaque, weather-resistant material with adhesive backings, did I select that one? What am I telling the world about me, now? Am I saying how, at parties, I like to tweak intolerant Islamists and Born Again Christians by delving into the mysterious implications of Godbeing Dog spelled backward?

Or am I simply saying that, more often than not, my dog is riding with me in my car? But co-piloting? Would someone reading my bumper sticker seriously believe—should I have a heart attack while blasting down Interstate 5 in heavy traffic—that my golden retriever is poised to stop drooling, to switch on the emergency blinkers, and to expertly paw the steering wheel, maneuvering the car safely to the side of the crowded freeway? (Reality Check: My dog is lolling his head out the window compulsively gulping blasts of air and glancing over at me every three seconds, employing dog-to-human mind-melding to communicate his stream of consciousness: How much longer ’til we’re at the beach, huh? Got any biscuits? You brought the float toy, right? Whoa! Lolling my head out the car window and gulping air at 70 miles per hour is awesome! Dude, I cannot wait to run across the hot sand and hurtle my body through endless Space and Ka-Splash into that cold frigging Pacific Ocean! )

I am considering buying a new car. But if I do, I won’t be able to remove the Dog Is My Co-Pilot bumper sticker from my old car. It has, as the cultural anthropologists say about elderly people who won’t leave their neighborhoods, “aged in place.”

But wait. If I get a new car I could get the third bumper sticker of my life. After all, I have changed, I have grown, I have evolved. Perhaps there is a bumper sticker that would sum up for the World everything worth knowing about me, myself, I?

What new message shall I choose? What message would be eternally True, deep with layers of Meaning, and stand the test of Time? Yet, would also be available in a colorful assortment of opaque weather-resistant material with adhesive backing?

Perhaps something about the central ambition of my life?

Nah. I’m not going to put a message on my car that both the Taliban and fanatical Christians would approve of.

My Other Car Is A Car

It has always been a challenge for me to take seriously those folks driving around with Love Your Mother and a green and blue image of Earth on the bumper of their gross-polluting Volkswagen vans. So I doubt I would follow the hippie path with something like, You Can’t Hug Your Kid with Nuclear Arms.

Perhaps, instead, something nihilistic?

Yes, I Do Own the Road

Voldemort is a Republican

My favorite quote is something supposedly said by a Jewish guy who supposedly lived in the Middle East about 2000 years ago. No, not that Jewish guy—this Jewish guy was and remains far less popular. His name was Philo of Alexandria, and he said—

“Be kind, for everyone you meet is fighting a great battle.”

That dense message is True, deep with layers of Meaning, and has stood the test of Time.

But it’s too long, and it’s phrasing is too lyrical for these attention-deficit hyper-active times.

Yet, perhaps Philo of Alexandria’s wisdom has already been modernized, that is, dumbed-down and sexed-up, in three emphatic words:

Now, what car should I choose to go with my new bumper sticker?