An odd but related thing happened just after I began writing this essay about doors, open and closed. But I’ll come back to that.

When I want privacy, if there is a door, I close it.

Not every person on earth always has a door to close. But for those of us with a door, closing it can be the most elemental act for maintaining our health, physical and mental.

Privacy is important. Especially in Western Civilization; especially to Americans; especially to this American. A closed door is a barrier, and also a shield. It keeps people out, and just as importantly, it lets me know that people are being kept out. The tension of feeling I could be interrupted is enough to interrupt me.

When writing, I dredge muck up from the blind depths of my unformed thoughts and feelings. When meditating, I close my eyes. When making love, I’m naked. When in the bathroom, I’m…busy. In all these activities I am dangerously vulnerable. I close the door so that I do not expose myself in public.

Of course, a knock on my closed door could be enough to interrupt me. But I then get to play Hamlet and choose, to open or not to open.

Except just now, when my wife opened the door of my office without knocking and said, “I’ve got to show you this.” She put her laptop in front of my face.

“Our water bill. See that?” She pointed at the last bar on a graph. It was lower than the other bars on the graph. “That’s our water usage since we installed the low-flush toilets.”

But my wife’s startling interruption while I was drafting this essay on doors, open and closed, is not the particular odd but related thing I mentioned earlier. I’m still getting to that.

Supposedly, I am something called White. Supposedly, my skin is white. Technically, white is the absence of color. But my skin is actually a very light tan that has a good deal of pink in it. Along with black or red moles, brown freckles, watery brown age spots, and shadowy subterranean streams of blue-green veins. That is the terroir of my pale skin.

Sometimes, when I close the door and meditate, which is like dreaming while fully conscious, I try to deeply and in exacting detail imagine what would I be like, what would my life, the sum of my experiences, be like, were my skin brown or black. Which would mean that the dark terroir of my skin would be rich with melanin-soaked color, a hue somewhere in a wide spectrum from ecru to purple black.

Every time I meditate on being me but with dark skin, here in America, I come to appreciate in a whole new way what it means to close the door. Whether that door is to a house, or to an apartment, hotel room, toilet stall, or cardboard box under a bridge.

As I sit behind my closed door and meditate on being Black, I imagine-dream what it would be like every time I opened a door, any door, and went out. Out into the streets, schools, offices, stores, cars, buses, planes, churches, hospitals, restaurants around me. I imagine-dream being among other people. The overwhelming majority of whom, in my part of the world, would be pale skinned.
(San Diego County White Population Percentage)

Were I dark-skinned, my neighborhood, town, and all the schools, offices, stores, and restaurants I went inside, would be altered. Slanted. Biased. I would be in a world with more tension, a sometimes subtle but virtually ever-present tension. I would be at risk of injury ranging from suspicion to humiliation through confrontation to homicide. All of it so casual that I can imagine-dream of no effective way to influence or control that risk. As a White heterosexual man with money and property, I typically get to decide where and when and to what degree I take risks. Were I Black, my risk management would be severely limited and would in fact most often be not in my hands, but in other people’s hands. The dark skin I was inside of would put me at risk. Everywhere I went. The only place I could, would, feel comfortable in my own skin would be in whatever room I could enter and close the door to. I imagine that if I were black, my psyche would be a wreck. Or I would have a hard-won wisdom no pale skinned person other than a Buddha could possess. Or both. Or ricocheting between both. All the time.

And that brings me to the odd yet related thing that happened just after I began dredging up the muck of my unformed thoughts and feelings about doors, open and closed:

A door, a closed door, became, briefly, a story in the national news.

The White male Republican governor of the state of Georgia, a state in which Black voters had shortly before been the key to electing a Democratic president and two Democratic senators, sat at a polished wood table. Six other White men stood around him.

Some of the news accounts would point out that the large painting seen in the photograph of the gang of pale skinned men was of the Callaway Plantation, on which more than 100 people with dark skin had once been enslaved by people with pale skin.

As the pale men stood before that painting to witness their Governor signing into law a complex of new rules that would result in making it harder for dark skinned people to vote, Representative Park Cannon, a dark-skinned female lawmaker, wanted to be in that room, wanted to bear witness to the signing of such a law.

She knocked on the closed door.

She was told to go away.

She knocked on the closed door again.

She was arrested and dragged away.

That gang of White men behind the closed door were intent on treating everyone below them in the American Caste System as, to varying degree determined by their relative position in that caste system, property. Their property. They manage their perceived property with laws. Laws sometimes made behind closed doors and sometimes made out in public. But the reason they make their laws is always the same. To keep doors closed. 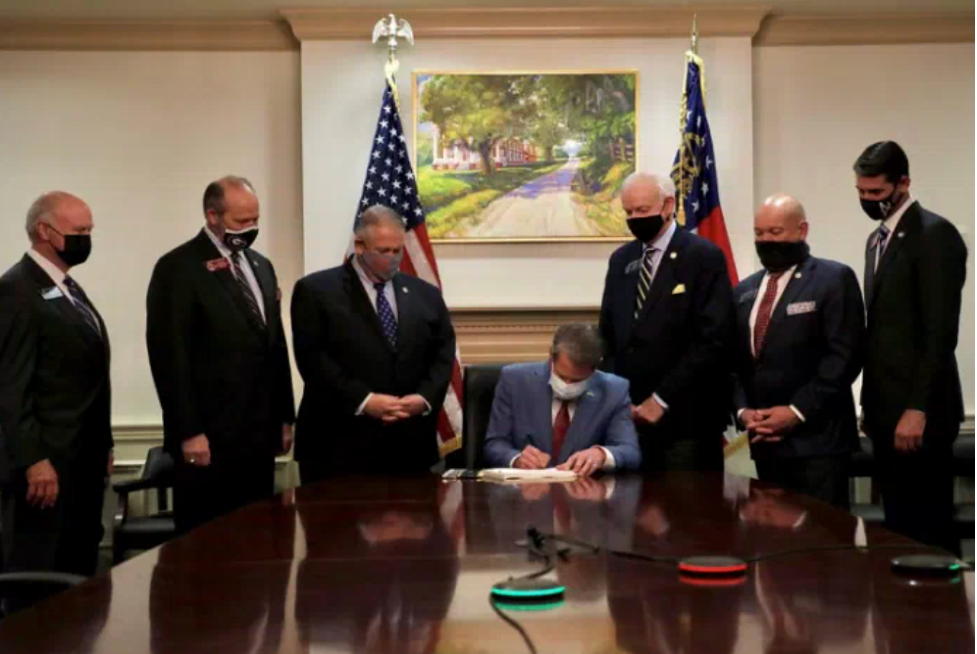